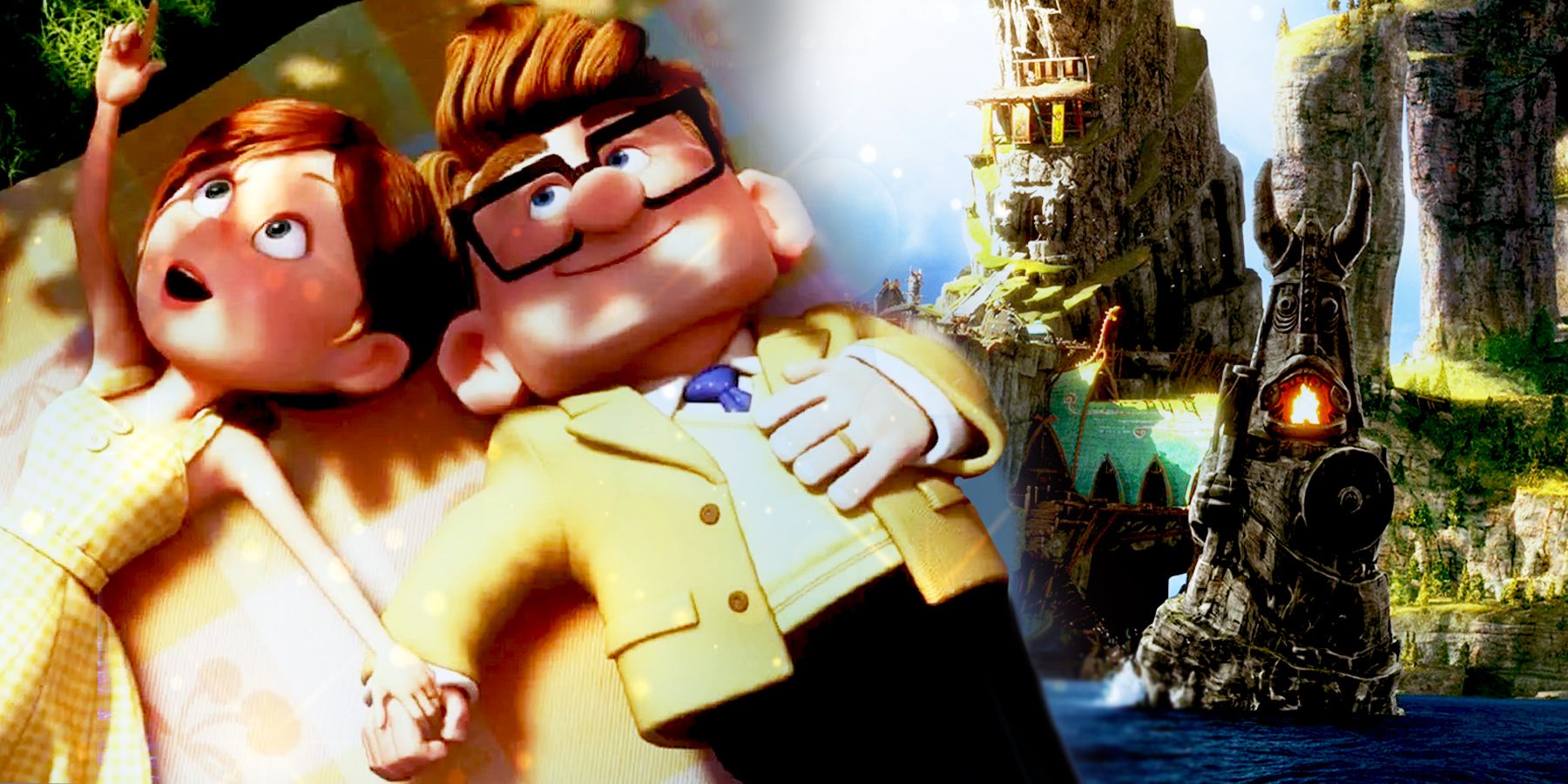 Nothing sets the tone for a fantasy adventure like an epic opening scene. Unlike stories set in the real world, the fantasy genre can take place in completely fictional alternate cities, worlds, and even universes. To help the audience immerse themselves in these imaginary worlds, a good opening scene can contribute greatly to the success of the film.

RELATED: 10 Best Fantasy Movies For Lord Of The Rings Fans

Most memorable fantasy openings take special care to bring their viewers into the lore of their universe. Overwhelming the audience with new information can make a movie boring, but jumping too quickly without any buildup can make a plot confusing. A good opening fantasy scene knows when to explain itself with narration and when to let the visuals or music do the work.

The legendary introduction to the first film of The the Lord of the Rings The trilogy opens on a black screen, narrated by the voice of Galadriel, played by Cate Blanchett. The Elven Queen of Lothlórien explains the history of the Second Age of Middle-earth, the rise of Sauron and the creation of the Rings of Power.

The Fellowship of the Ring has the daunting task of introducing the trilogy and establishing its characters. Its opening scene does a fantastic job of explaining everything the audience needs to know about its lore, then stepping back and allowing the characters to focus.

The Nightmare Before Christmas

Thanks to the iconic music of Danny Elfman, the opening scene of The Nightmare Before Christmas is memorable for both its music and visuals. The stop-motion film is incredibly whimsical and bizarre, and has become a cult classic for its unique concept, morbid setting, and enjoyable soundtrack.

The opening scene of The Nightmare Before Christmas introduces audiences to Halloween Town, a strange place whose inhabitants are a collection of monsters, ghosts, ghouls and the undead. The characters sing the song “This is Halloween” when introduced onscreen, placing the audience right in the middle of this strange new world.

8/10 The Pevensie family had a difficult life before Narnia

The Chronicles of Narnia: The Lion, the Witch and the Wardrobe

The first seconds of The Chronicles of Narnia: The Lion, the Witch and the Wardrobe projects its audience into the lives of the characters by opening with an air raid over the protagonists’ house. In one short scene, the tense dynamic between Peter and Edmund is established, the film’s serious tone is clear, and the characters’ motivations are easy to understand.

The transition from the real world to the world of Narnia in The Lion, the Witch and the Wardrobe There are a few scenes in the film, but its introduction makes the characters feel real. Additionally, it motivates the siblings’ desire to escape their world and establishes the relationships between them, which become more important later in the film.

How to train your dragon

Hiccup’s charming narration of Burke’s story is an iconic opening scene from the film How to train your dragon. Portrayed by Jay Baruchel, Hiccup’s take on his culture and hometown introduces audiences to the film’s Viking-inspired world of monsters and dragons while establishing its lighthearted tone and unique sense of humor.

The opening scene of How to train your dragon was colloquially titled “This is Burke”.Hiccup details the history of his culture, from the ongoing feud between Vikings and dragons, to jumping into the middle of a raid. The film’s opening is charming, humorous, and the perfect start to one of the most beloved animated franchises.

While most Miyazaki films have iconic opening scenes, Howl’s Howl’s Moving Castle is particularly whimsical and beautiful. This stunning Studio Ghibli animated film opens with a glimpse of Howl’s Castle as it wanders through the countryside, accompanied by the film’s classic theme, followed by shots of the main village and its inhabitants. .

Legend of the Guardians: The Owls of Ga’Hoole

Zack Snyder got his start in animation by directing Legend of the Guardians: The Owls of Ga’Hoole, a one-off fantasy film based on a book series of the same name. The film’s opening scene accompanies the flight of an owl as it flies over Tyto’s kingdom.

The animation in Legend of the Guardians is beautiful, as is its soundtrack. The film’s opening shows off its realistic art style alongside an epic soundtrack that immerses audiences in the fantastical world of talking owls. The protagonist, Soren, and his family are then introduced and discuss the stories of the legendary guardian owls of Ga’Hoole.

While most fantasy movies begin with an epic intro, Thor: Ragnarok starts right in the middle of a comic scene. It parodies the typical “wicked monologue” by opening with Thor, who is chained to the ceiling, and Surtur, a fire giant, having a conversation about the impending apocalypse known as Ragnarok.

RELATED: 10 Ways Marvel Has Improved Thor Over The Years

Instead of taking themselves too seriously, Thor: RagnarokThe opening scene of showcases the film’s unique sense of humor by poking fun at the fantasy trope it represents. As Surtur talks over and over about his evil plans, Thor frequently interrupts him and seems indifferent to the giant’s threats. This scene is iconic for its witty dialogue and the quirky brand of humor it brings to the MCU.

Disney’s first scene At the top is one of the most memorable and moving sequences in animation. Although the film contains no magic, as most epic fantasy stories do, it’s still a standout example of a soft fantasy adventure, complete with mythical creatures and talking dogs.

UPS The opening scene is a montage of moments in Carl and Ellie’s life, becoming friends, getting married, and growing old together. Their life, however, is not free of tragedy, and as the couple grows older, Ellie falls ill and dies, leaving Carl alone in the house they loved. This scene is renowned for its powerful storytelling and heartbreaking introduction to a wholesome story.

Guillermo del Toro’s dark fantasy film Pan’s Labyrinth is a fascinating story about a girl named Ofelia and the parallel words she finds herself in. While trapped in the real world, she also navigates a mystical labyrinth. The film opens with a shot of Ofelia’s death before reversing time and telling the story of Moanna, the princess of the underworld.

The two simultaneous stories that take place during Pan’s Labyrinth are, no doubt, reflections of each other. While Ofelia encounters mystical creatures in the labyrinth, such as fauns and fairies, in the real world, the effects of the Spanish Civil War continue to torment her and her family. The opening scene links these two worlds to Ofelia’s imagination and her perception of reality.

1/10 Harry, Ron and Hermione had to make great sacrifices to defeat Voldemort

While the Harry Potter the franchise began with a more childish and whimsical tone, Harry Potter and the Deathly Hallows: Part 1 gave the series a much darker atmosphere. The film is the first in a two-part finale, which concludes the saga of Harry, Ron, Hermione and the Hogwarts students and teachers in their fight against Voldemort.

The opening scene of Harry Potter and the Deathly Hallows: Part 1 is heartbreaking and powerful. Alternating between the characters’ perspectives, the film shows the lengths they must go to keep their families safe. Hermione tearfully erases her family’s memories of her existence as Harry says an eerily emotional goodbye to the Dursleys.

NEXT: Top 10 Fantasy Movies Based On Greek Mythology