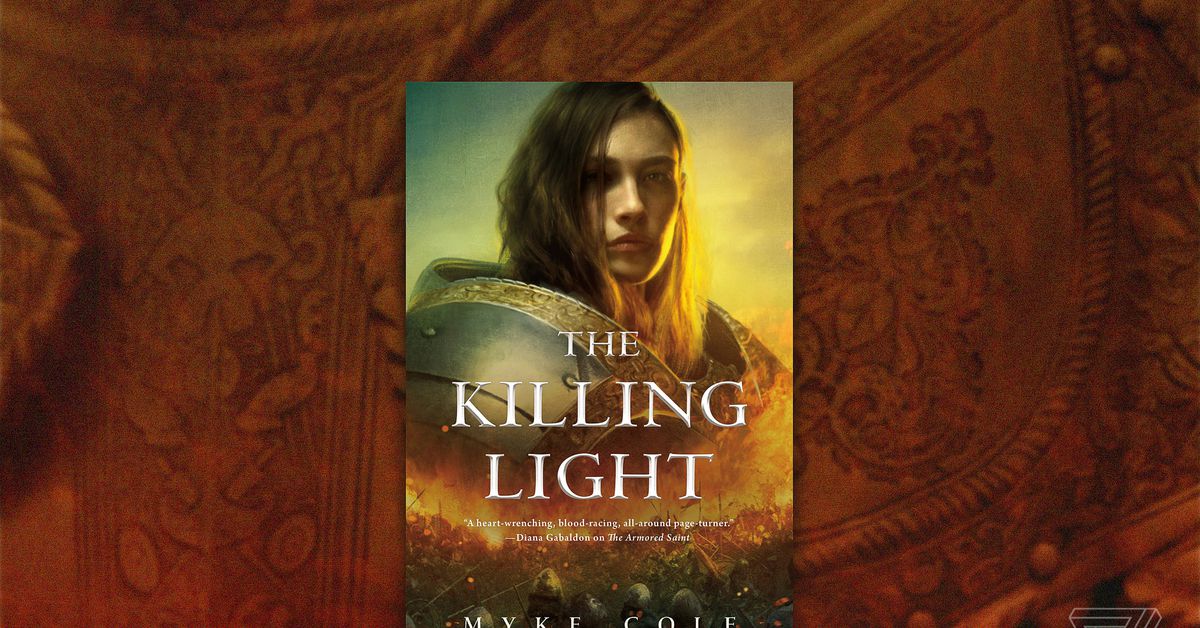 Two years ago, fantasy writer Myke Cole announced The armored saint, the first book in a new trilogy that would break away from its usual work, moving from writing modern military urban fantasies to something more in the vein of George RR Martin or Joe Abercrombie, with all the swords and witchcraft that one would expect in a modern fantasy book.

Spoilers ahead for the first two volumes of the Sacred Throne trilogy.

The first two episodes of the series – The armored saint and Queen of crows – were two of our favorite reads from last year, in which an oppressive theocracy known as the Order mercilessly hunts down magic users. A chance encounter with the Order leads Héloïse, 16, to launch a rebellion against them when her village is attacked, and in its aftermath, Queen of crows, she leads a growing rebellion as unexpected new allies come to her aid.

Now Cole will end this trilogy with The murderous light. In it, revolutionary (and perhaps some sort of holy nun) Heliosis and her allies attempt to free themselves from the control of the fanatics who control their land. But just like Cole’s other work, the call to the sacred throne trilogy isn’t just the fantastic action, but in the details that Cole puts into his work.

The edge recently spoke with Cole about the upcoming conclusion and his thoughts on working in a shorter format. We also got an exclusive preview of the cover of the latest book, The Killer light.

This interview has been edited for clarity and length.

Now that we come to the end of the trilogy, what’s it like to work with the shorter format of the short story about the Sacred Throne books? Obviously, you are building this whole world from scratch, and you have fewer pages to go than in a full novel.

In fact, it is extremely liberating. It allowed me to focus on a very close story. I think the thing I get the most compliments on The armored saint it’s how the plot and character development and story arc are packed into a smaller space. And I think people grew up with doorstop fantasies, right? And, by the way, I don’t screw up the doorstop fantasies. This is what people appreciate.

But in the digital age, in the post-Kindle upheaval, Amazon of traditional publishing, publishers have sought new ways to engage with readers. And one of the things that’s really been at the forefront of that, stretching the reader’s imagination for what’s possible, what’s consumable, what’s marketable, has really been the podcast revolution.

Because people listen to podcasts now, they listen to them all the time. And it came into this idea with series like Tanis and The black bands, and they kind of got people on the idea, kind of like we did in the golden age of magazines, consuming serial stories in teaspoonfuls. Serial Box is leveraging that and Tor.com is doing it with their new line, and it’s really cool to be part of it.

It’s also really cool to see how it lends itself, how it shapes my writing. It really helps you focus on concise prose, a tight script, and an overall cast that doesn’t proliferate like the cast of A song of ice and fire fact where you jump to different points of view, remembering who everyone is. It produces a really different reading experience and a really different writing experience. And this is an area in which I really enjoyed working.

Much of the Shadow operations books and the Awakening trilogy was the impact of your own voice and military experience on these books. Halfway through the Sacred Throne series, I know you published Legion against Phalanx. Has any of the research or work you have done for this book been reflected in the Sacred Throne books?

Oh my God, yes. I mean, first of all, the Sacred Throne trilogy is about a revolution that turns into war, basically. And understanding war and understanding the emotionality and interiority of soldiers and the experience of the soldier have certainly been instrumental in my writing. (Legion against Phalanx, for those who don’t know, have I studied Hellenistic heavy infantry combat in the 3rd and 2nd centuries BC. How the Romans fought the Greeks primarily. Really, it was the people of the Balkans, but the Greeks.)

There are so many parallels between the way armies engage in the ancient and medieval world. In fact, there are probably more of the same things than different, really, until you get to the Battle of Adrianople, which sort of ushers in medieval warfare, and then again when the gunpowder is done. really feel on the battlefields. You will see this in The Queen of crows, and you will definitely see it in The murderous light. There are major battles and sieges in these books that have been incredibly informed by the research I have done in Legion against Phalanx. One of the most interesting things about being a writer is that you end up learning all of these things about yourself, about others, and about the world in the service of making a good book. You don’t plan on doing that, and it’s kind of like that cool aspect of “the gift that keeps on giving” work.

Magic is not really as great a force in this world as it is in your previous books. Is there something about achieving that balance between more realistic and more fantastic that you’ve touched on in this series?

So listen, I’m not lying – or rather, I’m not doing a soft shoot. I am an imitator. My work is proudly derivative. I read stuff, I like it, I ingest it, I spin it, then I make it my own. And what was I reading that made the Sacred Thrones series what it is? I was reading Joe Abercrombie. I was reading George RR Martin. I was reading Robin Hobb. I was reading Peter Brett. I was reading the genre that I consider to be grimdark. And, of course, the Sacred Throne trilogy is a love letter to Warhammer 40,000 and the War hammer universe. All of these universes have certain aspects in common. One is the grim bleakness and adherence to the extrapolation of reality. We’re writing fantasy here, but it feels real. He must feel real. And he feels real in his horror. It resonates with people occupying a horrible world, which we all do.

Another aspect common to all of these universes is that they are not very magical. They really are, even in their fantasy series. In terms of light magic, active magic, the way you would think in Dungeons & Dragons or in my Shadow operations the universe, this is simply not the case. It’s absolutely by design. But I will admit as freely that it is the result of my influences and what I read and what I liked.

The murderous light is the conclusion of this trilogy. Are we going to see more works taking place in this world? Or is it too early to tell?

It is not too early to tell. This story is done. One of the things I really don’t like – and I think a lot of your readers and listeners will agree – is when people push a story beyond its limits. We saw that with X files, law? We saw that with Real detective season 2. You have a good story, and the good story is over. And people don’t want a good story to end. So they asked for more. But the truth is, they don’t really want more. And if you can’t deliver it, you’ll end up leaving people with a bitter taste in their mouths. No, this story arc is complete in three volumes. I don’t intend to see him again.

That said, years later, once I have fulfilled all my other obligations and completed my existing contracts and projects, I would be ready to take a look at what the fans are saying, what the sales numbers are. – and yes, what the sales figures are dictating. I am a professional writer. I write books that I want to bring out in a market. And if that market doesn’t support more books in the series, then that’s not something I’m going to do. But if all of these stars align, that’s something I would consider, but not for long.

Something in particular from the Sacred Thrones series that you hope to bring with you in your future endeavors?

I needed to prove to myself that I could write something in a different subgenre to get by. When I originally wrote The Fractured Girl, which was the book that became The armored saint, the first volume of the Sacred Throne trilogy, it took me three years. My agent rejected it over and over again. No one wanted to put it on the market, and I was really looking the failure in the face. When you get ready to prove yourself something and fail, I can’t describe how demoralizing it is. And I’m not sure where the reservations came from that got me to the point where Justin Landon was finally able to help me get it to a point where you can buy it on Tor.com and the transform into a trilogy. But they came from somewhere, and that’s the lesson I take.

It’s a really, really, really important lesson for me, and I hope it’s a lesson for everyone. Sometimes you are not wrong. Sometimes everyone is wrong, and it’s really hard to know when you are at this point, but it’s worth asking yourself the question and digging deep. “Should I give this one one more turn, one more polish?” Should I try again? Because if I hadn’t done that, so much in the case of Legion against Phalanx and the whole Sacred Throne trilogy, so arguably my most successful, popular, and the books I’m most proud of would never come into my life, and my life would be a lot poorer for that.

The murderous light will be released on October 1, 2019. The other two volumes of the Sacred Throne trilogy, The armored saint and Queen of crows, are available now.