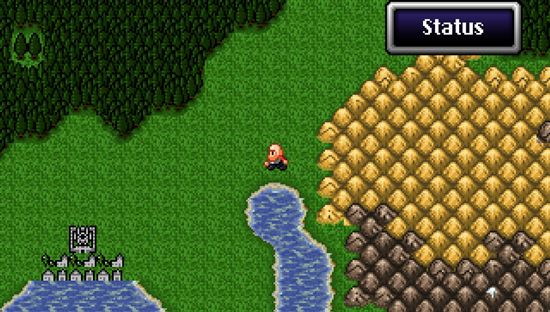 Of course, it’s the “borrows a lot from the last 25 years” aspect that will define the game for most people. After all, I don’t think it’s an exaggeration to say that if you’ve played games like Final Fantasy, Dragon Quest or The Adventure of Link – or even if you even play a lot of more modern descendants of those games – then there’s a lot here that will sound familiar, from top-down gameplay and turn-based combat (with combat/magic/item/execution options), to retro graphics and chiptune music. It should almost go without saying (but I’ll say it anyway) that your enjoyment of these games will largely determine how much you enjoy Dragon Fantasy Book 1.

That’s not the only factor, however. Personally, I never liked any of these games, I didn’t have the patience for them the first time around, and the nostalgia goggles didn’t make me enjoy them anymore – but I found Dragon Fantasy to be a relatively fun experience.

A lot of it comes down to the writing. No matter how rote Dragon Fantasy may seem with its quests and monsters and whatnot, it doesn’t take long for the game to reveal that it has a surprisingly funny soul. I mean, the hero, Ogden, is chubby and bald. Your first weapon is a pokin’ stick. The first two monsters you face are Mr. Rock Monster, who complains about his marital problems, followed by Mrs. Rock Monster, who worries about looking fat. The following monsters have names such as Lt. Slicey and Lt. Dicey, Obligatory Ork and Mister Lizard. In a seriously inclined genre, Dragon Fantasy’s willingness to poke fun at clichés is welcome.

(And I’ll be honest: even though I proclaimed myself immune to nostalgia goggles a few paragraphs ago, I’d be lying if I didn’t admit to being a little charmed by the way the game’s graphics could be toggled between 8 and 16-bit, not to mention the literally perfect chip-tune soundtrack.)

That said… you’ll probably only really enjoy Dragon Fantasy Book 1 if you’re a fan of those old RPGs. If you like going through monster after monster in the quest for more XP (and better skills and weapons, better XP will get you). If you don’t mind reading the same lines over and over again (believe me: what’s funny the first time you read it is a lot less so the twentieth). If you have the patience to buy fifty medicinal herbs one by one. If your heart races hearing 8-bit music with the slightest airy static noise in the background. If that describes you, you need to jump into this game immediately – and if it doesn’t, you’d probably be better off looking elsewhere.