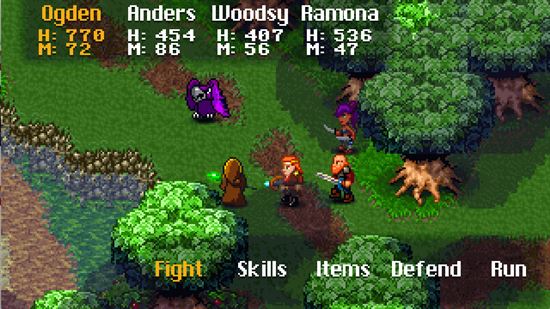 I have never launched a controller before. I’m not saying this to brag (because it’s not really brag-worthy), or to show off my skills (because I usually play games with the easiest difficulty). Rather, I say this to give this next sentence a bit of context: I hated Dragon Fantasy Book II so much that I almost threw away my Vita in frustration.

I didn’t of course, because I can’t imagine throwing semi-expensive tech into a room. But still: there was a point in the game where I was so annoyed with what was happening on screen that my instinctive reaction was to throw my Vita on the ground. The only thing that stopped me was the sudden realization that… well, that I was so angry that I was ready to launch my Vita.

My reason for being frustrated was simple: Dragon Fantasy Book II is an incredibly repetitive game with an absolutely atrocious combat system. Or, to be more precise, half an hour into the game, I was pissed off that I had to fight for what seemed like the thirtieth or fortieth time against enemies that I had already defeated at least. half a dozen times before. .

Really, there is everything in that line that is wrong with Dragon Fantasy II, so I’m going to break it down a bit. First the enemies: they freak out everywhere. You would think this would count as an improvement over the first game, as in this game all enemy encounters were randomly scattered across the map, but it isn’t. Here you arrive on a new screen, and you are almost instantly under siege from all sides. Even if you have already defeated them, there doesn’t seem to be any rhyme or reason for their reappearance; I lost track of how many times I went from one section to the next and then came back, only to find that the rocks / goblins / fish / whatever I had just killed had all returned.

This is particularly a problem, of course, as each battle takes so long to unfold. You see, other than the first couple of minutes (when most battles are solo), almost all battles here involve large groups of fighters taking part in turn-based battles with opponents taking more than one hit. to kill. This means that each battle – which, again, happens frequently because the same monsters are everywhere – requires you to go through each of your characters first to select moves, and then watch your opponents make their every move, then you actually do it. your movements, then you choose other movements, and so on. On top of that, most of the time you are fighting monsters in large groups, as they are hyper-aggressive and instantly revolve around you as soon as you move to a new part of the map. You can try to run, but even then you have to select “Run” for each party member, then wait until your opponents have all made their move before trying to run away. Of course, running is a bit futile, because even if you manage to get away on the first try, you’ll quickly find that your escape is short-lived – after all, you’re surrounded, which means that even if you run away from a monster, you are always running towards another.

This means that combat is usually your only option, but that too has its drawbacks. First of all, every turn-based battle has a ridiculous number of misfires. The upside, I guess, is that both sides are likely to miss, but that doesn’t make it any less absurd to watch when everyone in your party is breathing their attacks and then most of your seven or eight opponents are missing too. And when you make contact, there’s really no way of knowing how effective your attacks have been, as the game doesn’t give out a health meter for your opponents. In other words, you just hack, hack, and hack, hoping that at some point that will be enough to finish off the other group.

What if you won your battle? Then you see the same “funny” lines repeated until you feel nauseous. Now, in the first game, that was kind of a highlight, as the writing was funny and unexpected – although, of course, it was about diminishing funny returns, because what was funny the first few times l ‘was significantly less by the 50th. Here, on the other hand, you don’t even have that; the lines seem played at the beginning, and are a little angry by the tenth (not to mention the thirtieth, fortieth, fiftieth, etc.). There is a slightly witty dialogue that takes place between your character and those in towns / villages / towns, but this is counterbalanced by the sheer volume of laugh lines repeated in battles.

What makes the game totally nasty, however, is that Dragon Fantasy Book II doesn’t even have the audiovisual charm of Book I (our review here). This game showcased the talents of some guys who not only knew how to be funny (at least in small doses), but who clearly loved the look, sounds and gameplay of the 8-bit and 16-bit RPGs of their youth, and were able to recreate their experiences quite perfectly. This time around, they’ve updated their benchmarks a bit – think really premium 16-bit graphics, but with significantly better music – but it’s nowhere near as charming. Time and time again I found myself comparing Books I and II, and the latter turned out to be worse each time.

At this point, I wish I could say something positive to counter all of this negativity. I would like to point out something – anything – that redeems the game. But I can’t do it. Dragon Fantasy Book II was tedious at the best of times. At worst, it made me seriously consider breaking my long-standing personal ban on breaking my electronics. Recent price drop or not, this is not an option anyone should take seriously, so you better ignore this game altogether and save yourself from a worsening world.