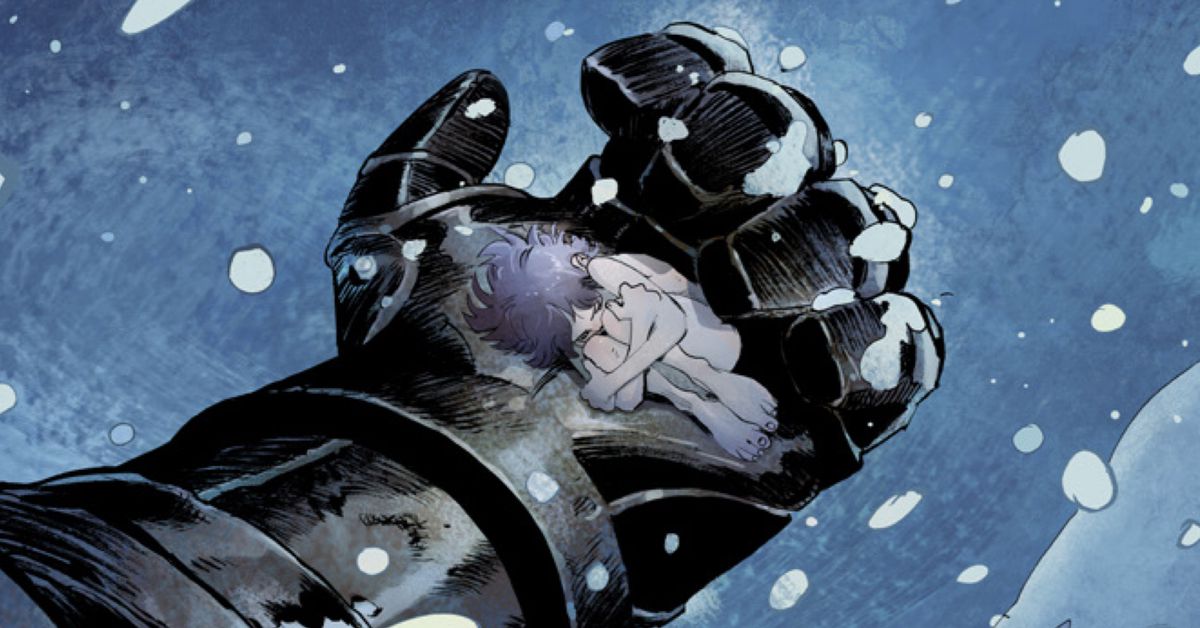 bloody step is a challenge.

The new series is a wordless adventure in an original fantasy world, seen through the eyes of a young girl and her protector: an armored Giant. The girl grows as she traverses increasingly dangerous terrain, and by the end of the oversized first issue, new questions arise surrounding the identity of the giant and the strange blue men who follow them.

Simon “Si” Spurrier is known for his evocative prose and distinctive dialogue, but not for restraint in his screenplay. Can he step back and let his artistic team carry the story? Artist Matías Bergara has proven he can sketch out virtually any idea, but can he tell a silent story with the clarity and depth that keeps an audience engaged?

The answer is yes. Spurrier and Bergara, joined by colorist Matheus Lopes and graphic designer Emma Price, push each other to do something different with their latest project, and the experiment is a complete success.

Spurrier and Bergara’s partnership began at a level that most creative teams only dream of reaching. Coda, their 12-issue miniseries for Boom! studios, east one of the best fantasy comics of the last decade, a remix of Tolkienesque mythology centered on the crumbling relationship between a bard and his orc warrior wife. This was a huge step up for Bergara, who had previously worked on crime and horror comics like Cannibal and Sons of Anarchy, and he found an ideal collaborator in Spurrier, whose crazy ideas gave him plenty of cool things to draw while pushing the boundaries of his emotional storytelling. Quite simply: Coda rocks. But it’s a very different book. bloody stepwith dense narration and dialogue that sculpts the world and the characters with remarkable specificity.

The new series is a figurative work, asking readers to fill in the details of the story within a framework provided by a plethora of visual information. Coda was an international hit, and one of the benefits of having a textless book is that you don’t have to translate it. Silence is universal, and while there are technically speech bubbles with dialogue in bloody step, it is a language composed of symbols and shapes. It’s not meant to be understood, but to indicate that the girl and the giant don’t talk. They communicate non-verbally; affection comes from touch, not words, whether it’s the Giant holding the Girl when she’s tiny, or the Girl catching the Giant’s finger as she grows and they begin to walk side by side coast.

Lopes previously worked with Spurrier as a colorist on The dreama series that required even more visual variety than Coda. There, he enhanced the exquisite detail of Bilquis Evely’s line art while heightening the surreality of the book’s boundless dreamscape. Its colors harmonize just as well with Bergara’s art on bloody stepand he has even more responsibility to create an emotional atmosphere with his palettes.

The color story of this first issue reflects the girl’s growing awareness, starting with a predominantly blue palette, then gradually incorporating warmer colors as the girl emerges from the giant’s palm. There’s no green until an important scene that ties the color to the Girl in a very meaningful way, and once that happens, the palette explodes. Later in the issue, there’s a montage page that runs through pink, purple, teal, green, and blue panels as the pair travel through different countries, and the drastic color changes accentuate both the passage of the times and distances traveled.

bloody step is full of grand environmental spectacle and giant vs. monster action, but there’s just as much magic in the little moments, which show another side of Bergara’s ingenuity. The first time the Giant lets the Girl out of his hands, she sees a flower hanging above her and grabs it. This three-panel sequence does brilliant things with spacing and perspective to highlight the girl’s ignorance of the danger around her as well as her infantile state of mind. The first panel shows the girl sitting naked in the snow, looking at the flower which is not in the same panel, but in the gray gutter between the panels. The way the flower breaks the edges of the panel here is very subtle, but it highlights Bergara’s innovative way of thinking about the relationship between two-dimensional images and three-dimensional space.

The flower effectively functions as its own panel – although it starts in the first and lands in the gutter – but it’s also planted in a physical space outside of the images around it. This is where Bergara pulls off a very clever visual trick. The third panel changes the angle, but it frames it so that the girl reaches for the same flower that is in the gutter. This intensifies the depth of the final image, which shows the Giant punching a massive wolfbat creature behind the Girl. The positioning of the flower actively draws the reader’s eye away from the action, as does the girl’s attention.

Is it a tiny moment that I’m potentially too fixed on? Maybe, but that’s a big part of the joy of a purely visual comedy experience. There are no words to distract from the art, so these choices become more pronounced. And the contrast Bergara establishes in this short sequence pays off in setting up the issue’s first two-page splash, an image that hammers home the contradictory natures of the series’ two leads.

Presented from an enlarged view with a large pond in the foreground, the splash page contrasts the innocence and serenity of the girl with the violent aggression of the giant, placing them on opposite pages facing opposite directions. Seen as an isolated work of art, the homepage communicates a message of rebirth and hope as a solitary flower blooms in a frozen landscape, its radiant warmth linking it to the golden roots seen below the surface of the water.

But it is a delicate hope. The girl may be able to ignore the violence surrounding her at the moment, what happens as she grows and becomes more aware? Can this hope remain pure or will it be corrupted? The book is called bloody stepso it’s very likely that innocence will be tested as the girl and the giant face ever greater threats.