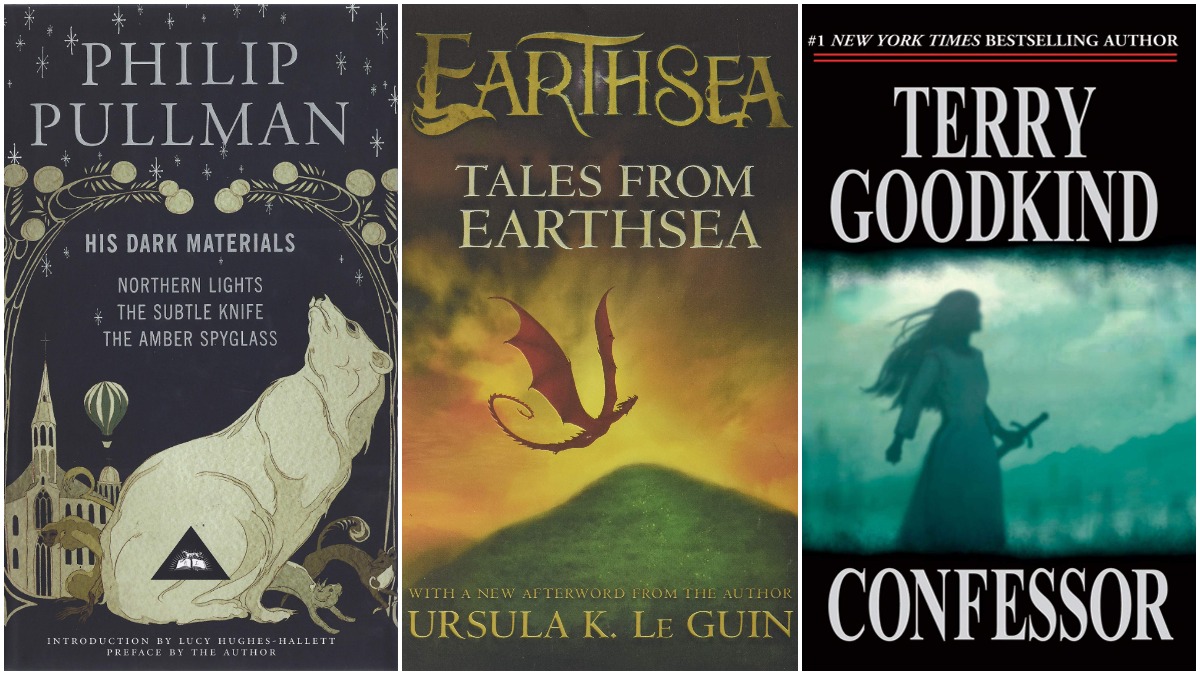 The Best Fantasy Book Series of All Time (2021 Edition)

Any list of the best fantasy book series of all time will be controversial. To make our list, I’ve only included series that have ended – so that doesn’t mean A Song Of Ice And Fire, even though it’s one of the best. I’ve also picked just one from each author, although several people here have more than one excellent series to their name; it just seemed fairer that way. There are a few classics here and also a few newer entries, but they all deserve their place for one reason or another. So, without further ado, here are ten of the best fantasy book series of all time.

The Black Magician Trilogy is YA, but that shouldn’t put you off if you’ve never read it before. If you like magic in your fantasy, the title should also let you know that this is something you need in your life. If you’re looking to move on from a certain boy wizard, then this will be the series to help you do it.

Sonea is a girl who was born in the slums of Imardin, only to find that she has the same magical talents as some upper class people. The trilogy follows her as she tries to escape the magicians guild, who want to control her powers, and how she learns her magic and uses it to save her country.

The Daevabad Trilogy is the latest entry on this list, with the final book The Empire of Gold being released last year. It might seem premature to include it in a list of the best fantasy book series of all time, but it’s easily one of the most exciting series of recent years.

If you like your fantasy with the flavor of alternate history, then these are the books for you. Set in an alternate 18th century Ottoman Empire, our hero is Nahri, a con man who reads palms and cheats Ottoman nobles for their money. She summons a djinn during an exorcism and thus begins a journey full of magic, monsters, love, and a devastating civil war that threatens to tear the world apart.

Hobbs is one of the authors who could easily have had more than one entry on this list; his prolific songwriting is truly a thing to behold. Her Farseer trilogy has, since she finished it in 1997, spawned the second and third trilogies, The Tawny Man Trilogy and Fitz And The Fool, written years later – so if you love the Farseer trilogy characters, it’s good to know that there is more to their story.

In the Farseer Trilogy, FitzChivalry Farseer is an assassin learning his trade in a kingdom where his uncle is waging war against an enemy who is turning his people into emotionless zombie-like creatures. Fans of these books love the characters and their intricacies in particular — and the number of novels that feature Fitz tell you just how popular he is.

4. The Sword of Truth – Terry Goodkind

Goodkind’s The Sword of Truth series is the kind of thing you might think of if I said the best fantasy book series of all time; it’s old school and it’s epic, spanning twenty-one books written over nearly a quarter of a century. Goodkind also wrote most of the books on his own, with the exception of the final trilogy, which means the series is easy to pick up and take down – and if you don’t like a book, you can just skip to the next.

It’s hard to sum up something as epic as this series, but in essence, it follows Richard Cypher, a young man defending the New World against the Imperial Order, and the Old World. It’s a series about freedom and the fight to defend freedom at all costs.

You can’t talk about the best fantasy series without Earthsea. One of the oldest on the list – the first book came out in 1968 – it’s a real classic. Much like Sword of Truth, there are plenty of Earthsea stories to wade through; in addition to the original trilogy, Le Guin has published two other novels and a collection of short stories.

Earthsea is made up of a large number of islands and it is a magical world. One of the things that really sets it apart from many others is that it doesn’t have the stereotypical “vaguely medieval European” vibe of many fantasy series. Even in 1968, Le Guin worked hard to portray characters of different races in his stories, and that’s admirable.

6. The Wheel of Time – Robert Jordan

The Wheel of Time is another giant series, boasting fourteen volumes published over twenty-three years, and easily earning its place among the best fantasy book series of all time. Author Robert Jordan died in 2007, after eleven books were published, but he left very detailed notes and Brandon Sanderson completed the series for him.

If you’re thinking about epic high fantasy, The Wheel Of Time is exactly the kind of thing that comes to mind. Dark agents of the Dark One seek the Dragon Reborn, a prophesied savior. Three young men from an unassuming village are driven from their homes and set out to unite the kingdoms against the Dark One.

In the distant, post-apocalyptic future, the earth is ravaged by frequent disastrous events that continually shatter and reshape not only the world, but the people who must survive it. The world-building of the Broken Earth Trilogy is what really sets it apart, along with the diversity of the cast of characters.

If you are someone who doesn’t like epic fantasy style, then Discworld is the series for you. In forty-one charming and hilarious novels, Pratchett immerses readers in a world so teeming with life it’s hard to even know where to begin to describe it.

From the hard-working City Watch police in the sprawling city of Ankh-Morpork to the witches of the Ramtop Mountains, there’s no one who can’t find something to love in Discworld. And if you happen to be someone who would dismiss Discworld for being not only fantastic but comical, then know that Pratchett also writes satire so strong that unsuspecting readers will cut themselves off. There’s not a single social issue he didn’t cover.

His Dark Materials has found a new audience thanks to the very good bbc tv show years, but the best way to discover these books is to read them. There is simply no comparison there. Pullman’s masterpiece in a writing career full of excellent work, these are technically young adult novels – but young adults so blindly good, adult readers were more than willing to give it a chance.

In a world not entirely unlike ours, the series follows Lyra and Will through a series of parallel worlds, pursued by the all-powerful Magisterium – a clear facsimile of the Catholic Church. Pullman has been criticized for his treatment of religion in His Dark Materials, but the books are an incredible exploration of philosophy, theology and physics as well as organized faith, and have so much more to say than the fantasy novel. medium that is worth hearing. .

We all know the story of The Lord of the Rings, even if we’ve never read the books, so I’m not going to summarize it here. The story itself has a fairly simple narrative of good versus evil, Chosen One. But it’s Tolkien’s world-building that is really a model for so many fantasy writers who came after him. It was immersed in Middle-earth in a way that few authors have been immersed in their creations – The Lord of the Rings is just a tiny part of something so much bigger.

READ NEXT: The Best True Crime Books You Should Read

Some of the coverage you find on Cultured Vultures contains affiliate links, which provide us with small commissions based on purchases made while visiting our site. We cover game news, movie reviews, struggle and much more.