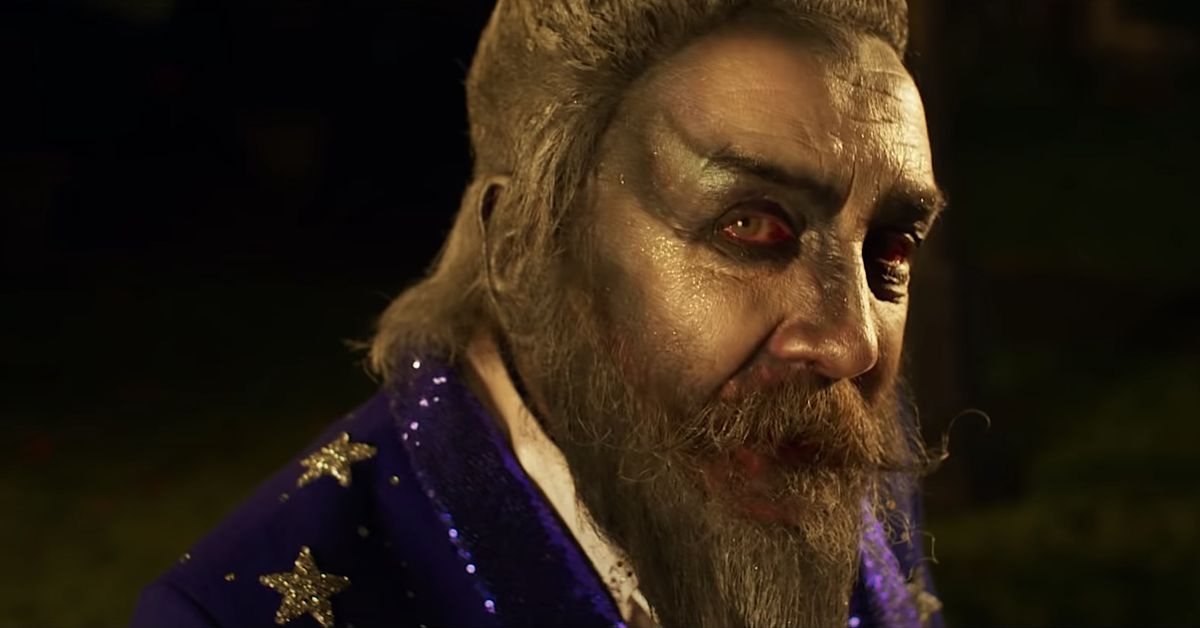 The Show review: Alan Moore’s bizarre fantasy film is in theaters tonight only

This review of The show was originally released in conjunction with its screening at the Sitges Film Festival in Spain. It was updated for the film’s wide digital release on October 5.

The history of acclaimed comic book creators making films is relatively short and without distinction. Many comic book writers have contributed to film adaptations of their work, sometimes even raking in screenwriting credits, but more creator-focused films like Frank Miller’s bizarre version of The mind tend to be relegated to curiosities. “Curiosity” certainly applies to The show, a new film from the brilliant, famous and immensely grumpy writer Alan Moore. Moore did not realize The show, but he shares possessive credit with director Mitch Jenkins, whose past work includes a variety of other Moore projects.

It has become rare to see Moore’s name appear prominently in the credits of a film. He has no interest in Hollywood cinema and insisted that his name be removed from adaptations like V for Vendetta and Watchmen. (Dave Gibbons, the artist who created the original Watchmen comedic with Moore, receives both credit and money for the recent HBO TV series.) So what does an Alan Moore movie actually look like, endorsed by Alan Moore?

To fans who have followed Moore’s Show Pieces short film series, this will sound familiar. (Three of Show Pieces’ five shorts are available as a makeshift feature, streaming on Shudder.) The show is a continuation of those black tinted stories in a dreamlike version of Northampton, Moore’s English hometown. The outline of the film version is simple: a man calling himself Steve Lipman (Tom Burke, the bad news boyfriend of Memory) arrives in Northampton looking for a man named James Mitchum. His story changes, as he claims to be Mitchum’s brother first, then his friend; eventually, it turns out that he was hired to locate an Heirloom Necklace believed to be in Mitchum’s possession.

The search leads him to a hospital, where he meets Faith (Siobhan Hewlett), who arrived around the same time as Mitchum. (She’s the subject of Show Pieces’s first short.) He also rents Mitchum’s former apartment at a guesthouse run by Chipper Becky (Ellie Bamber), a local walking guide who can’t help but telling occasional fun facts. about Northampton.

The idea of ​​a detective looking for something as small as a necklace presents an intriguing logistical challenge; in this situation, it turns out that a man’s whereabouts are much easier to trace. It’s also a storytelling challenge: Steve’s mission isn’t really urgent, neither for the character nor for the audience. The story isn’t all about looking for a lost accessory, but complications tend to come in chunks of explanation rather than carefully packaged clues. When Steve’s real name turns out to be Fletcher Dennis, for example, it’s not particularly clear why he needed to use an alias in the first place, given how indifferent he seems to the revelation of its true identity. He uses an alias because it’s something people do in stories like this.

Moore seems more interested in winking at those conventions and indulging in the more metaphysical aspects of the story, as Steve / Fletcher brings Faith on her mission, and the two begin to share vivid dreams with overlapping images. The showThe “real” Northampton is already very dreamlike, with a few ideas inspired by Moore’s weird brain: at one point, Fletcher, who plays the role of a detective but isn’t really one himself, visits a real one. Detective agency run by two kids in a clubhouse, featuring black-and-white single-scene cinematography and harsh “storytelling” spoken aloud by one of the junior detectives. Many of the city’s characters and quirks come with an equally funny twist, and Moore’s dialogue is often funny.

At the same time, Moore’s inventiveness, along with Jenkins’ use of slanted angles and other stylizations, makes it more difficult to immerse in the film’s alternate realities. Many of the scenes take place in a sort of dream / nightmare / afterlife hybrid, where Moore himself shows up in elaborate makeup, playing one of two comedians who left Northampton. Moore’s presence more or less sums up the experience of watching this movie: he’s fascinating to watch and listen to, with a richly sonorous voice – and it’s always a bit tedious to spend so much time with him.

Moore and Jenkins are obviously aiming higher than a self-aware black pastiche, or at least something beside one. Still, those elements of the film are a lot nicer than dreamy sequences featuring another made-up type of clown. (Sometimes it’s hard to tell when Moore makes a meaningful hint or kidding: Does the clown intentionally resemble Joaquin Phoenix’s Joker? Do any of the songs in the movie, mostly co-written by Moore, make him (even, intentionally sounds like a parody of Pulp singer Jarvis Cocker?) Another character hovers over the debates with an almighty computer while donning a silly superhero mask, confirming Moore’s disdain for superheroes matched only by his inability to stop saying how much he despises them.

While all of this is happening, the credible archetypal performances of the actors are absorbed into the intelligence. It’s hard to deny Moore the chance to follow his creative muse onscreen, especially when he pays such a specific tribute to where he grew up. In this case, it is also difficult to care much about his whims. The show is a mind-blowing one where much of the mind seems superfluous.

The show is now available for rent or purchase on digital streaming sites like Amazon and Seen.